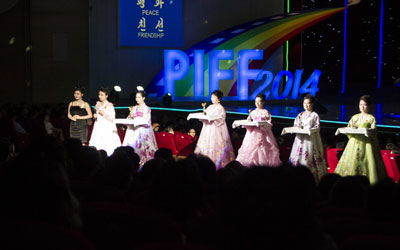 Forget Sundance. How would you like to show your film in the most unique cultural exhibition in the world?

The Pyongyang International Film Festival is a biennial event held in Pyongyang. Though formerly limited to films from “non-aligned and other developing countries,” the event has grown to include a wide selection of international films from British comedies, U.S. co-productions, and even featured the first horror film to be shown in North Korea.

Filmmakers worldwide are encouraged to enter their films for competition or, if for some reason your film does not meet the festival requirements, for a non-competition screening in the festival’s Film Exchange. Pioneer Media can both help you to determine if your film meets the festival requirements and to officially submit it to festival’s organizing committee. Please download and complete the relevant forms below and send along with a link to watch your film to media@mediapioneers.net.

Please note: If we determine that your film meets the festival criteria and pass it on for official submission, applicants must pay $25 to cover postage and relevant submission expenses.

Entry Form (Link to form)
(To be completed by all applicants)